A Halloween themed comedy show with the best comedians in the region, with proceeds going to support Afghan refugees!

About This event
Let's put the CARING back in SCARING! Grassroots Comedy DC presents another hilarious comedy show to support Afghan refugees, but this time with a spooky Halloween twist!

Proceeds go to Homes Not Borders, supporting their important and timely work to ensure that Afghan refugees have what they need to adjust to their new lives in the and around the Nation's capital. You know what’s really scary? Being a refugee and arriving broke and jobless to your first home in the U.S. only to find one small couch, bare walls, and four plates and forks. Homes Not Borders makes this experience less terrifying by preparing welcoming and fully stocked homes for new refugee families, as well as helping them settle into their new life with cash assistance and employment help.

If that's not enough, we'll be creeping it real with a killer lineup featuring some of the funniest comedians in the DMV, with several who know a thing or two about the immigrant experience. With headliner and hometown favorite Rahmein Mostafavi (Sirius XM, Kennedy Center), Leo Nguyen (Boston Comedy Festival), Gigi Modrich (Amazon Prime), and host Dana Fleitman (DC Improv), it would be a grave mistake to miss this one! Plus, we’ll be getting into the spirit with some extra macabre merriment and silliness throughout the show -- almost tomb much fun!

Tickets will be going fast, so get yours while you can! Costumes/Halloween flair encouraged. This is an outdoor event. 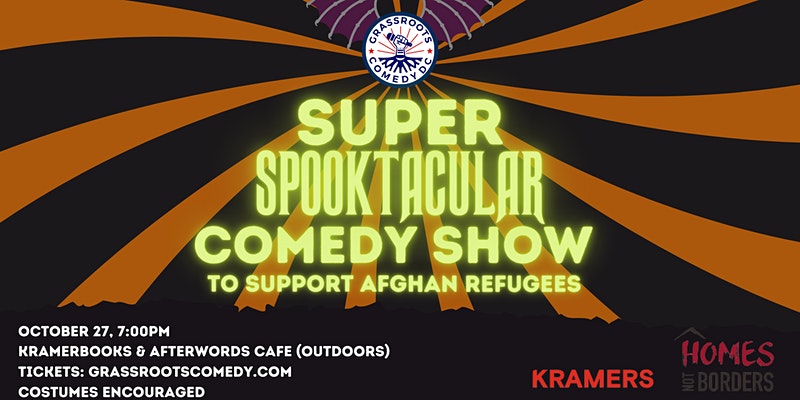